Our exchange this year started with the arrival of the German leaders and some German members at the tent camp. They prepared the area for the Welshies. Because of the flights delay, they arrived later as planned. The small German group welcomed the Welshies with our typical “Fluffy sheep”-song. After we ate Hotdogs, we went to bed tired.

Today the German arrived the camp and the 2 weeks started for us. This was the first time that we see the new welsh people and it was really great. We talk very long and have fun together. Then we played many minigames outside. At the last we eat all together and the day is over.

At 8 o’clock our leaders woke us up with some music. After breakfast at 8:30 we went into the forest to collect wood for the campfire. Because it started raining, we stopped that activity. After a short leaders meeting our plans for the day changed and we made a Brexit-Workshop. Later, when the meal was over, we went to the F3 in Fellbach. There we spent 2 hours. At 19 o’clock we had dinner and as the day before the ice man came. About one our later our typical music quiz began. When the program was over everyone was more than happy and remembered the beautiful day.

At 7 o’clock the leaders woke us up at 7:30 we ate breakfast, then at 8:30 we went in the tv tower in Stuttgart, then we walked to the train station and went shopping in the city, then we all went for food and free time to shop. Then we are arrived to the minibuses and had free time in the camp. On the evening we eat fish sticks with potatoes. After the lunch we play the game family fortune. We must tell stories about our family and at the end we search the family treasure. It was a very long and exciting day.

Today we had a lie in until the leaders woke us up at 8:30 for breakfast at 9am. After breakfast we had the sports rally where we were in groups and had to do 7 activities. There were lots of running and fitness involved. One station was military course. Where everyone was covered in mud. As a result, everyone had to wash off in the lake before showering. Some of us were so excited we were jumping in. For lunch at 1:30 we had last night’s fish fingers. After lunch was the Welsh program which had lots of puzzles and we played benchball with massive ball which was hard. We then had dinner of wraps and salad. That everyone enjoyed. It was tasty. After dinner at around 8pm we had the fashion show. Everyone dressed up and it was very funny. Team 4 won on the whole and they deserved it. We then had free time before curfew.

We drove to the mountain shelter. After we have arrived, we did the preparations for the dice theatre. Then we had free time the whole day and did what we wanted to. That was a nice dice-day.

On our only full day in the mountains, we had breakfast at 8am an immediately afterword’s we went to the high ropes. We had a great time climbing in the high trees and we left at 12:30. For lunch we had a spaghetti soup and some nice sausages. In the afternoon we prepared the dice theatre which were presented performances. Curfew was at 0am and we got time and needed sleep.

Our last day in the Bavarian hills started with a breakfast at 8:30. We prepared our luggage and put everything into the trailer. Then we walked down to the Alpsee Coaster where we enjoyed the ride down the mountain. We loaded everything into the buses and drove back to the tent camp for three hours. Because of some complications we needed more time for our way home as planned. For dinner we had BBQ and we filled out a paper with questions for the couple-dinner.

After we woke up, we had breakfast at 8:30am. At 10am we had a workshop about sustainability. Every group discussed a lot about climate change and had nice placates. Then we had lunch at 13 o’clock. We also enjoyed the Welsh program where we learnt a lot about Wales. Then we got ready for our couple dinner with our partner at 19 o’clock, where we ate Maultaschen and potatoes salad. In the evening we had to trust them and at least there we had a winning team. It was funny and interesting.

After breakfast we did an outdoor game called King Naeem. After the outdoor game we had lunch and after lunch we had some free time to practise for the mini-playback show. Naeem’s family gave a presentation about Iran and how they come to Germany (Why?). After the presentation we had free time again and we used it to swim in the lake. Our dinner was very special because Naeem’s family cooked the meal for 3 hours for us. It was a typical Iran dinner. After food we had the mini-playback show feat DJ Pat Fever. After every group performed their performance, there was a disco where everybody danced too it. Curfew was at 12pm. Some young members decided to sleep outside ad got wet in the morning.

Today we got to have a lie in so breakfast was at 10am. We then went to the local town to do a photo challenge. It was a lot of fun as we had to go around and ask people for different photos. After that we all arrived to the tent camp to have dinner.

Today we had the cooked breakfast at 10am cooked by the Welshies. Later we went to a town to complete a photo challenge. We took a variety of photos, ranging from standing with a bank employee to posing with a stranger. It was an interesting challenge. We also had time to go shopping. My group all bought really nice ice-cream. In the evening we had dinner. As well as this, we had a presentation of the group’s photos from the day. There was also some photos shown from two years ago.

Today so far in the morning I got tipped out of my bed by David und Houdel then went to have my breakfast then went to tidy and pack some of my stuff and we have to write thank you letters and me and Corley was mucking about in the main room and I got put on my bum in a costume box.

So far the day has mainly consisted of preparation for the farewell evening. I must admit that the constant rainfall put many spanners in the works in regards to preparation, however I am … looking forward to this evening.

We had to stand up at 8am because the Welshies had to pack their stuff for the journey. After breakfast which was at 8:30am we played an outdoor game cakes “settlers”. In this game we had together materials by completing challenges and answering questions. The materials could be used to build buildings for a village. Lunch was at 1pm. After lunch we got the information that the flight from Stuttgart was cancelled and the Welshies had to drive to Frankfurt. To catch their flight the Welshies had to drive at 2:30pm. After the Welshies left we played a game in which group got a land e.g. land of sport or land of animals. The groups hat to think of a dance, object, greeting, outfit and song for their land. We prepared our performance before we had lunch at 6:30pm and presented our results afterward. Curfew was at 11pm.

We had to stand up at 8am. At 10 am we went to the “Aquatoll” in Neckarsulm. We had a lot of fun there. As specially in the big wildwaterslide which is very funny. But hurts as well. The food was good as specially the burger was nice. Then we traveld back to the tent camp and drove Naeem home. At dinner we had verrrrrrrrrrry good pizza at 7pm. Then we had free time and we played volleyball after we made a chair circle and talked about the exchange and the next exchange. After that we had free time.

Today we had breakfaft at 9 o’clock. After that we had free time. Then we had to clean the camp and take the rubbish off. At the evening we made a campfire and ate some sausages. We enjoyed the last evening at camplake Ebni.

Today we woke up at 8:30. Then was breakfast. Then pack we our luggage and cleaning the camp. Then we go to Stetten-Beinstein at 13 o’clock. 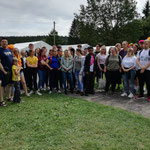 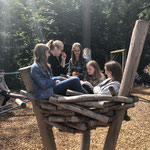 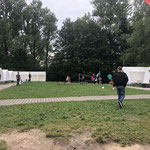 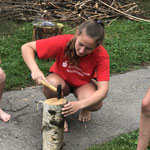 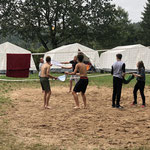 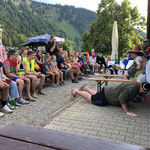 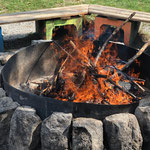 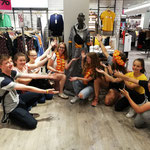 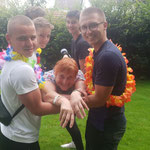 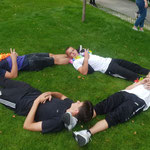