26. Juli 2012
Today we started our trip to Wales. First we met in Stetten Beinstein and Leonberg. After we said goodbye to our parents we started our engines. While we were driving we had to solve a bus quiz. A few hours later we arrived in the Netherlands . At 4 o'clock we arrived at the port but we had to wait for Raji. Then we went on the ferry. There we had a perfect dinner. After dinner many of us were on the sundeck for making crazy pics. Then the evening was nearly over and we had a lot of fun on the stage. Robert & Clara

27. Juli 2012
Today we arrived in Wales. The weather was very very sunny. That was good because it isn't normal for Wales. Finally after our 5 hours journey we arrived in Betws. Right after we went to our rooms we did some icebreaker games to get to know each other better. Then after the dinner we had to go in our rooms to go to sleep. But almost no one slept much. We were all very excited about what us will expect in Wales. Fabi

28. Juli 2012
Today we went to the Millennium Stadium in Cardiff. We went there to watch 2 games of the Olympic games: New Zealand vs. Brazil and Great Britain vs. Cameroon. Before the first game did start we were allowed to go shopping in the city center of Cardiff for 1 and a half hours. After both games (NZL 0:1 Bra and GB 3:0 Cam) we went home and ate dinner. It was really fun. Everybody enjoyed the game because they were really exciting to watch and also sitting in the big Millennium Stadium was very impressive. Lucas V.. 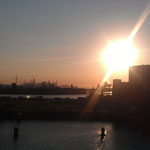 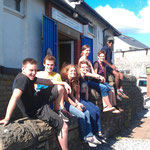 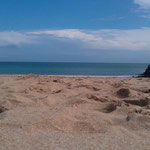 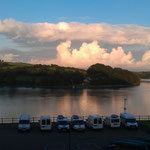 29. Juli 2012
Today we did our own Olympic games .We started right after breakfast . Therefore we were divided up into different groups. In our groups we had to do various disciplines like the long-jump, bowling, high-jump, table tennis, pool and searching for stars inside the main building. Later the prices weren't given to the groups which did the best. Instead they were given to the groups which worked best in a team and made the best presentation. After these games we went down in the park for doing some more team games. Ben & Annika

30. Juli 2012
First we went to Boulders wall climbing center in Cardiff and spent 2 hours with climbing the sometimes really challenging walls. When we finished my whole body was hurting and I could just hardly move. Then we went to Bad Bikes in Blackmill where a few of us had a go of a pump track which was even more challenge after the wall climbing. When we were done with the bad bike some people walked for 3 quarters of an hour up to Wyndham where my youth club is. In my youth club we done pool, table tennis and also had food. We also met the club hamster Floyd. Everyone loved him! Then we went back to Betws and had some free time to relax or for those who were still not done time to play some games. Later everyone fell quickly asleep. Craig

31. Juli 2012
After a good breakfast at 9 o'clock like every morning the german group started to prepare the swabian night. So we went to the hall where we got dinner and acted our scatches and other stuff. Also we searched in Albis cloth boxes for the right dress for the evening. Fabian wanted to look like a fancy and total crazy woman but before the night started he decided to change some of his clothes. The swabian food which we got that evening was really good and also the welsh members and guests liked it pretty much. It was an amazing night and everybody enjoyed it. Everything went really well so we all slept very well this night. 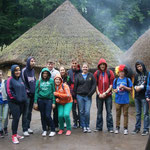 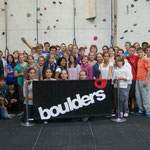 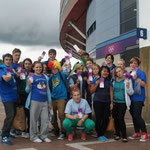 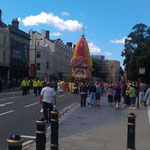 1. August 2012
First we went to the Museum of Welsh life but there it started to rain. After that we went to Cardiff again. In Cardiff we had 3 hours time to go shopping. Past shopping we watched two soccer games in the Millennium stadium. The first game was Switzerland vs. Mexico and it ended with zero to one for Mexico. The second game was Great Britain vs. Uruguay it ended one to 3 for Great Britain. Back at home we started to pack our stuff into our bags. Then we must clean our rooms and put our stuff into one room. That day everyone had to go to bed much earlier than normally because at the next day we would drive early to Pembrokeshire. Max

2. August 2012
We got up early in the morning and after breakfast we had to pack our last things. Then we took our stuff into the minibuses. After a short trip we stayed in the high rope garden. It was very nice there and all guys enjoyed it. Right after 3 hours were gone we drove to the new house. As we arrived in the new house we went in our rooms and unpacked our things. The beds and the food in the new house were much better than in the first house. Then after the unpacking we got some free time for the rest of the evening. In these 3 hours free time three of the guys colored their hair. Alex and Lukas blond and Lucas brown. At ten o'clock we had to go to bed. Alex

3. August 2012
Today we went to Oakwood theme park. At the beginning we all stayed at the vertigo. It was very cool nearly everyone loved it. In little groups we went then to the other sensations of the park like the speed or the bounce and many more. We left the park at 4 o'clock and drove back to the hostel. Dinner was at 5 o'clock. In the evening we did some teamwork games. After the games we went to Oakwood again because there was a big fireworks. It was really nice. Also there was a little disco too. We danced a little bit and then we had to go back to the hostel and to bed. It was a nice and big day. Pia & Janina 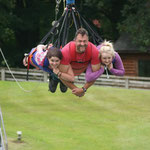 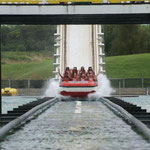 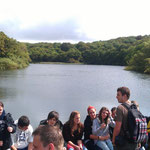 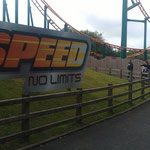 4. August 2012
We woke up at 8:30 to go for breakfast at 9 o'clock. We made a lunch box and got ready and set off for Barafundel bay. We walked for circa one and a half hours and finally we reached the beach. There we played rugby and layed in the sun. The beach was beautiful and we enjoyed it. We walked back and saw the scenery of welsh from the cliff tops. We came back to the hostel had dinner and did a quiz subjects that were interesting. Then we all got time to practice the song for the talent show tomorrow night in our groups. Sophie & Luzia

5. August 2012
We woke up at 8:30 o'clock to go to breakfast at 9 o'clock. After breakfast we had to practice our talent show. Every group must practice the song with dance and sing performance. At 11 o'clock we met us in the stone circle. There a leader told us about the next game. The game was "bringing the postcards back to the sailor". In this game we had to go to different countries and play little games to get money or new informations or things that helped us to find the lost postcards. At 2 o'clock we made a little break for lunch. In the afternoon we continued the game. After the game we had to practice for the talent show again. At 5 o'clock we had dinner. In the evening we had the talent show and a big disco. It was a very funny day. At 12 o'clock we must go to bed. Tatjana

6. August 2012
Today we had breakfast at 8 o'clock. Then we went to the stone circle there the leaders told us what we were going to do next. Kayaking and coasteering. After a short drive in the minibuses we arrived at the bay where we had done the activities in our wet suits. Then we got into the water. At the beginning it was very cold. But later it got ok and the wetsuits hold us warm. In our four groups we explored the two activities well. When we were kayaking it was very exhausting but pretty much fun. After a short break we changed the activities. The coasteering was strength of mind and after it you were very cold. In the evening after dinner we drove to another beach where we played a game. We had to run cross dooms and find some leaders with different colored glow sticks. It was very beautiful to be at the beach at night and then the game was funny. After it we all were tired and went to bed. Tamara, Maxi, Catlin 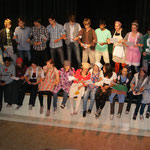 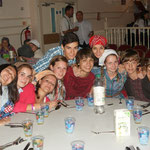 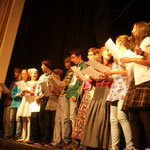 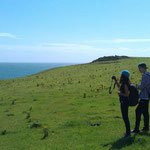 7. August 2012
Today we went to Tenby town where we went shopping. We bought a couple of things. Then we went to a little theme park where we went pistol shooting , karting as well as archery and motor boats. We had a lot of fun. We came back home for having dinner. After it the leaders played some sketches of funny scenes which had happened on the exchange. After everyone received a present and the official speeches were hold the final disco started. Nearly everyone cried because it was the last night. Craig & Eva

8. August 2012
Breakfast was at 7 am and after it we had to take our luggage out to the buses. Then we cleaned our rooms. At 9 am all got in the buses and drove 2 hours to a parking area near Bettws. There we had to say goodbye to the welsh group. We all were very sad but also very tired. Now the long trip home began. We drove 6 hours to Hull. There we got on the ferry. After visiting our cabins we had the best dinner of the last 2 weeks! Sorry kitchen team but it was really the best! The evening program of the ferry company was funny but not as good as the program we saw on the first ride. I think some of the members didn't sleep that night. So it was a very exhausting day. Let's see what the next day will bring us. Maxi

9. August 2012
In the morning we woke up at 6 o'clock and had breakfast at 6:46 in the ferry restaurant. It was really delicious after 2 weeks in Wales. We met us at 7:30 o'clock at the reception. We all were ready but the ferry hasn't arrived at the harbor. So we had to wait a long time. Later we drove on the way we came back to Germany. We had breaks every 2 hours until we arrived in Leonberg. The whole time in Wales was very good and the people all in all were although good! Selina, Tine, Anna 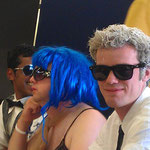 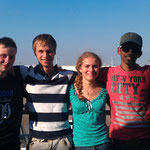 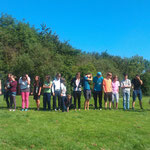 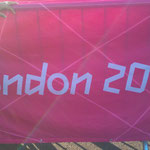