Today some of the German members still were in the camp. After that at 12.30 am the German members arrived at Lake Ebni. First we ate lunch. Then we played cool welcome games. After that some members used the water slide and others just relaxed and slept in their tents. Finally we played together Volleyball and shared our skills and soon we all met for the tasty lunch and had a great evening. The best at the evening was that the "Luschenverein" FC Bayern M|nchen lost their game in penalty shootout. Shootout against Wolfsburg. The great team VfB Stuttgart won their game easy against Manchester city with 4:2. After the halftime Stuttgart shoot 4 goals and the result was 4:0. I think they will be German Champions this year. So the first day end, it was very cool but all of us missed the welsh members. Joris, David, Birte 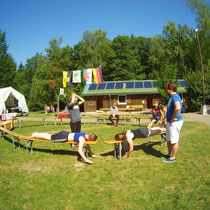 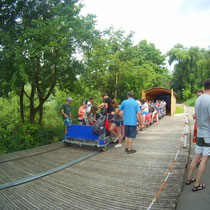 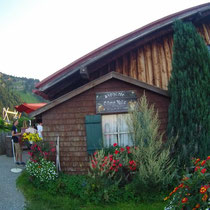 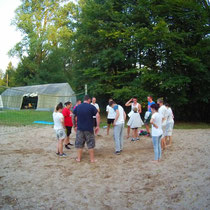 Today the Welsh group arrived at the camp at lake Ebni. The German group started the day with preparations for the arrival of the welsh guys. After that they played an outdoor game where they had to find a certain number and do a task. The game was a lot of fun. After the game we enjoyed our freetime. We played volleyball and football. The Welsh group met on the coach. It was a long bus ride. We waited in the airport for an hour or so before boarding. The flight itself took about an hour and a half before being picked up by Albi and other german leaders. When the welsh group arrived at the camp we sat down and ate some delicious food. After food we all went outside to get to know each other. Once we learned each others names we had a curfew at 12:00. Thank you Albi! Kerria, Jana, Ieuan

Today we woke up at 7 am. We then had breakfast at 9 am. We then participated in Paddy's music quiz. We were split up into 4 teams. Team three won. After that we ate lunch and later on we prepared for the intercontinental game. The game was fun and a memorable time. The land of clowns won and personally I enjoyed watching land of babies due to their costumes. Later on we ate dinner. We also had a huge fire during the night. The best part of the day was when the ice cream came to the camp. Liam, Jack, Marc

Today we had an early breakfast because we went canoeing and bike railing there for we had to make a lunch packet. We were split in two groups. One group started with canoeing and the other group went bike railing, Later we swapped. We had much fun and the weather was pretty nice. We arrived at the tent camp at 3 o'clock and had some free time. Many of us played volleyball or basketball. For dinner we had a nice BBQ with salad. We also had a delicious dessert. Chocolate-bananas from the campfire. After dinner we had to prepare our luggage for the mountain shelter. Then we had free time. Some of us were sitting around the campfire. It was a very nice day. Janina, Benny, Polly 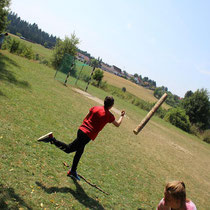 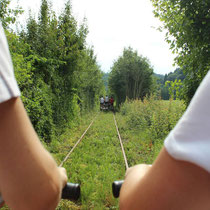 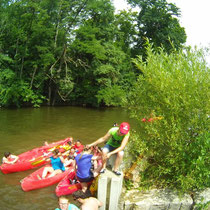 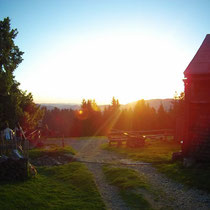 We woke up at 7 o'clock because breakfast was at 8 o'clock and we left at 8.30. We went to the Bavarian mountains. At 2 o'clock we took the lift to the mountain shelter. After we looked at our rooms we slept we had free time. In this time we had to prepare our show for the dice theatre. For dinner we had "Kdsspdtzle". It was very good. Philip and Thomas ate very much. Philip ate 4 dishes and Thomas 7 dishes. In the evening we showed our theatres and team Albi with the words "Georgia, Middle age, Penguin, but first let me take a selfie, youth exchange, and "Elvis Presley" won the dice theatre. Later some Germans walked to the hill cross. Curfew was at 11.30. It was a very hot and great day. Tatjana, Charlotte

The first activity we had was climbing in a high rope garden. It was a lot of fun because we could made groups on our own. Albi climbed with a group of members which where to young to climb alone. He filmed us at the flying fox. It had gone very soon to evening. Then after lunch we had fun. After that Marc, Max and Benny have done a drink competition. Then they felt bad. In the evening we did a night-walk. We walked in groups of 3 or 4. Then they walked with a distance between each group. After a few meters the groups got scared by a few leaders with a paper streamer spray. Then there was Paz with a big water gun and shot at us. We were all wet and Paz had a lot of fun. And after all jump scares we reached the hill-cross. Conner, Max, Martin

We woke up at 8 o'clock in the mountain shelter then we went for breakfast at 9 am. We than cleaned our rooms and packed our bags and put them in the back of the trailer. After that we walked down to mountain and waited in line to ride the Alpsee-coaster the rest of the way down the mountain. Down we entered the busses to begin our three hours journey back to camp ebni. We left at 10 am and headed for the supermarket where we were able to go shopping for things to bring back to camp. When we arrived back at the camp it was so hot that we all made a water slide and enjoyed pouring soap over ourselves and running and sliding down it. In the night we practiced and performed albis next fake couples witch was so funny and made everyone laugh. We then had some freetime. But then we had to prepare for bed. As everyone finished we took our beds outside in the middle of the field underneath the stars - and everyone had the best night sleep ever. Ellen, Sascha, Lloyd

We woke up and went to eat breakfast. After breakfast we were all put into groups and attended different tasks around the tent camp. After lunch we got the songs for the mini playback show. The topic was music and soundtracks. Then we had time for practicing. A few people went down to the lake for a few hours to chill. We all then had a very nice ice cream bought by Albi. Although the dinner was very tasty. After dinner we all played "who guessed that". People were called up to the stage to participate and Danielle smelt multiple shoes. Jack, Natzge 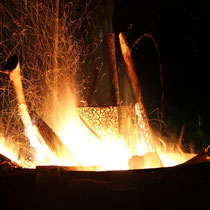 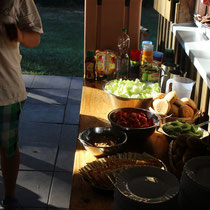 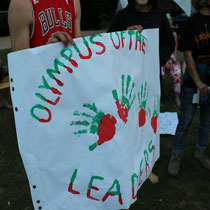 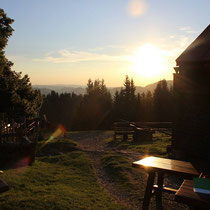 Sunday morning we woke up at half nine and had a welsh breakfast at 10 am. The breakfast was very tasty. After breakfast we were put into groups for the highland games. We then participated in the games. We did things like tossing the caber and wellie throwing. We then practiced for the mini playback show. After a few hours of practice we had dinner. After dinner we all attended the mini playback show. Group four won the show. They were very good. Then we went to bed. Goodnight. Danielle

We had breakfast at half past seven. And after this we then got changed ready to go swimming. We stayed there for 2,5 hours and had a great time there as there was plenty of different things to do. After we went to Schorndorf we had about 2 hours for shopping in the city and looking around. In The evening we did workshops. We could decide between baking, dancing, make music with wood, "Schuhplatteln" and an organisation team. Then in the night we had an early curfew because so many people were ill. Jacob O.

We played a game of rounders though the germans play football / Cricket rounders. In the afternoon we went to the lake and then we had ice cream at the van. Soon after we had welsh / german games which included water activities and chubby bunny. In the evening we sat around the camp fire and all slept outside. We slept outside to watch the shooting stars with everyone from the camp. The sky was really clear. Holly, Melissa and Sophie

We woke up at 8 because breakfast was at 8:30 we had the same breakfast as the rest of the days. There was bread, cornflakes, jam, honey etc. After breakfast we had some free time to clean ourselves and get ready for our first activity witch was at 10:30. Our first activity was members vs. leaders and we had to compete in little games to win points. There were 15 games in total. Some of the games that took place were: match the country to the flag, quiz, hoola hoop, make knots in a rope and let the opponents untie it. The end result was members won by the last game which made the game exciting. After our activity we had lunch at 13:00. We had a normal lunch with bread but also with leftovers from the previous day. Once lunch was over we had free time to relax, play football our volleyball, go to the lake and the ice cream man came at 16:00. During our free time we had to pick a date for the candle light dinner. We then dressed in nice clothes for the dinner which was at 18:30 and the leaders were our waiters and they brought us our meals and our drinks. The kitchen team cooked a delicious curry followed by a well presented dessert. Then we had more free time before our last evening activity started at 20:30. At 20:30 the leaders played some funny or embarrassing moments the youth exchange guys experienced. Everybody had a laugh and there were also speeches from Albi, Paz and young members. Some gifts were exchanged as a way of remembering. This was followed by a fire, a disco and some lanterns. Two out of 5 lanterns landed in the trees and we were glad they didn't burn. There was no curfew so we had a long disco and a lot of people slept outside because of the shooting stars. This night was very emotional and we were looking forward to 2016 youth exchange. Maxi, Lena and Jasmine

The last day with the welsh group. The day began with a very nice breakfast. There were the delicious german brezeln and some other things. All the leaders and the members were very sad about the last day with the german / welsh group. The "welshies" put their stuff into their bags and the germans did nothing. At 16 every one of us drove to the airport to say good bye to the "welshies". There were a lot of tears! A lot of people cried. Janina, Jacob O., Rhys and Lena cried the most. After that, we drove back to the tent camp and went to bed. Niklas and Tom

Today is the last full day in the youth exchange. That is sad because we had a great time here. First we had a very delicious breakfast all together. Afterwards we cleaned the tent camp. There was a lot to do. After that we packed our bags because we are leaving tomorrow. If we look back, we had a very funny, interesting, amazing and great time.

We woke up at 7:30 am. And we packed our suitcases. We cleaned the kitchen and the bathrooms and the tents. After breakfast at 8:30 am to 9:00 am we put our suitcases into the vans. Everybody was sad because we had to leave the tent camp after two exciting weeks with our friends from Wales. The people from Leonberg and Endersbach drove away at 11:30 am but some had to go earlier. When we had to say good bye to each other no one could hold back tears. Especially Houdel because he had to go back to the stone age and he loves us so much. When we look back at the last two weeks we all agree that we had an amazing time, made new