Saturday, 29 th July 2017
At 12 am we came to the tent ground. We had a little free time. Then we had dinner. After the dinner we granted the tents. After that we had free time and played football or volleyball. Then at 6 o'clock it was dinner time. It was very delicious. After dinner we played some community games. It was very cool and funny but the best thing is that we played football until midnight. I was very tired after that and at 1 am I went to bed.
Tim, Denis

Sunday, 30th July 2017
At 9 o'clock we had breakfast. After some free time, we had to get some wood from the forest-. Then some of us had a devotion and the others played some games until 1 pm. At 1 pm we had lunch. After lunch we played "capture the flag". That was funny! After that we had free time again. We played football, volleyball and some of us went to the lake Ebni. At 6 o'clock we had dinner. We ate meat loaf with some delicious salads. After dinner we had free time. We prepared how to surprise our Welshies. Such a big fun!
Niklas N., Maren

Monday, 31th July 2017
Yesterday we spent our first full day in camp together. Throughout the day we done various different activities we took part in sports. After the activities we had free time and played football, volleyball and Paz showed us his drown as we done something meaningful for Albi. Then we done a bit of work on social media where we learned varies things about internet. We also learned how good and bad it could be.
Sascha, Jake, Robin

Tuesday, 1st August 2017
We had breakfast at 8.30. After that we played a game called Asterix and Obelix. It was really funny and very hot. Then we had time for preparing the theater for today evening. At one o'clock we had lunch. Now we had to prepare a presentation for evening program. The Swabian evening. That was really funny, because the Welshies had to speak the Swabian language. We had dinner with Maultaschen mit Kartoffelsalat. That was so cool. We had a lot of fun.
Linda, Corley, Ashley, Björn

Wednesday, 2nd August 2017
We had breakfast and then we made our way to Allgdu for 3 days. We had to travel in the buses for 3 hours and we sang songs and had a good time. We arrived and had a ride up to the mountain shelter with a ski lift. We went to our rooms and then we went into our teams to practice our performance for tonight. After a good supper we enjoyed the performance of all groups. The leaders present blind date first. It was really funny because they took names from different members. The next thing was that members present their own shows. It was really funny and crazy and the winner group had to show their performance a second time. It was a nice day.
Luisa H, Emilia H, Cloe, Samual

Thursday, 3rd August 2017
The morning of Thursday at 8 o'clock we had breakfast and got ready to do the mountain walk, but sadly I could not complete the walk because of my knees. But all of my friends said that it was very hard but it was worth it. The others walked on the top of the mountain and a beautiful side. You could see for miles and the walk was fantastic. We walked for five hours and at the end of the walk all of us were very tired because of today. In the evening we had a wellness program with masks, massages, yoga, cold water and stayed up till eleven o'clock. Then we went to bed.
Tia, Joe, Esther

Friday, 4th August 2017
Friday morning, we woke up at 8 am, had breakfast and got ready to leave the mountain shelter. After we loaded the trailer we set off to the Alpsee coaster and set off to the high rope course. For us the high ropes were really funny and enjoyable but also challenging at the same time. We were in the high ropes for around 4 hours. When we got back to the tent camp we had dinner, a fire and settled down to sleep around 11.30 pm- 12 pm.
Thomas, Lacey, Niklas E.

Saturday, 5th August 2017
On Saturday morning we woke up ready for breakfast at 8.30 am. We then left the tent camp at 10 am. We then drove to the fun park which was 20 minutes away. We got the tasks to complete a series of activities which included aspects of the park. After arranging ourselves into groups and being told the tasks we all set off. When we set off we first saw apes and a tiger along with parrots as well. Examples of tasks that were set included, taking pictures with a person with an orange t-shirt, taking pictures with 5 separate bins. After we completed the tasks we all went off and had fun on the rides. At 3pm we left the park and went back to the tent camp. At 6pm we had BBQ with potatoes with varies vegetables. We then got dressed up for casino night at 8pm. Casino night included "Black Jack", "UNO", Memory", Poker and roulette and snail race, where we won and lost. The winners of the night were Jake and Birte! Curfew was at 12pm. We all went to bed to rest for the next day.
Laura, Mitchel, Shakira, Birte

Sunday, 6th August 2017
On Sunday morning we woke up at 8.30 am. And had breakfast at 9am. After breakfast at 10.30 am the game "My team is able to do." started at 12 o'clock. Then we had lunch at 1 pm and finished it about 2pm. After that the ice-cream-man came and everybody got two scoops of ice cream for free! Awesome! Then we had free time until 4pm. After that Paddy tried to do the music Quiz but we had a lot of technical problems. So, it was delayed to 7pm. After the quiz we had around about one hour until we had curfew at 10.30 pm.
Etienne, Marius, Charlie

Monday, 7th August 2017
The first thing we did was breakfast at 7.30 am. We also had to make packed lunch for our long day ahead. Then we went to "Hall of Soccer" to do bubble soccer. We spent time playing normal football too. It was very funny. Everyone was falling over and Albi was putting people upside down. After playing bubble soccer, we went to a town called Esslingen. It was very nice with shops and spent our money. Then we made way back to the tent camp and had a couple of hours free time. Next, we had dinner at 6pm. The food was okay. Then the Welsh leaders prepared a Welsh evening and we made Welsh cookies and they were amazing. After the welsh cake making we had a disco that we enjoyed because of the lights and DJ Paddy. We had an early curfew at half past 10.
Marc, Sean, Lena, Lucy, Megan 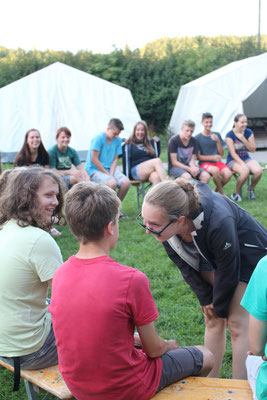 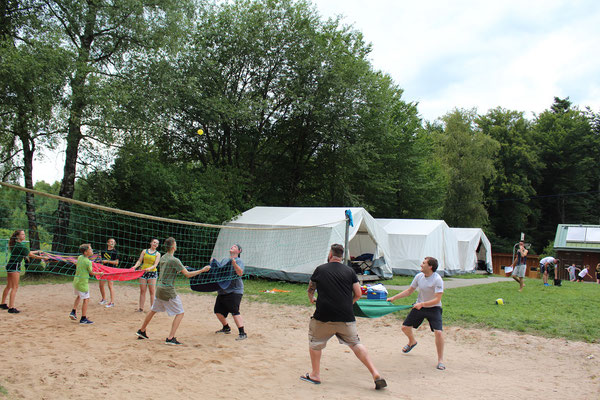 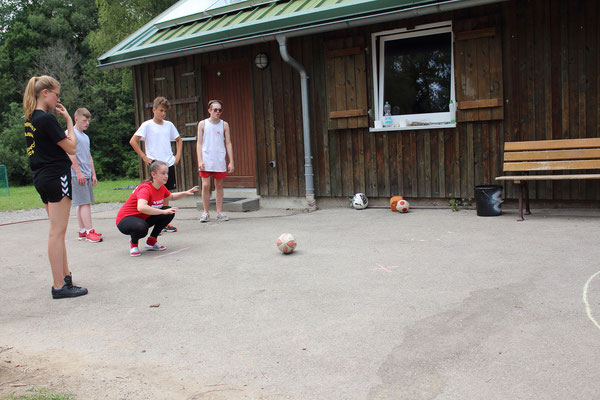 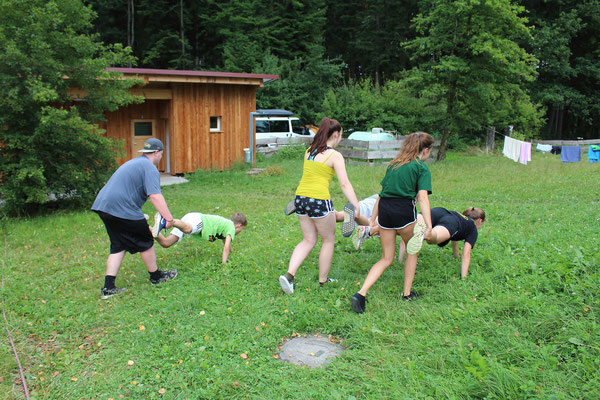 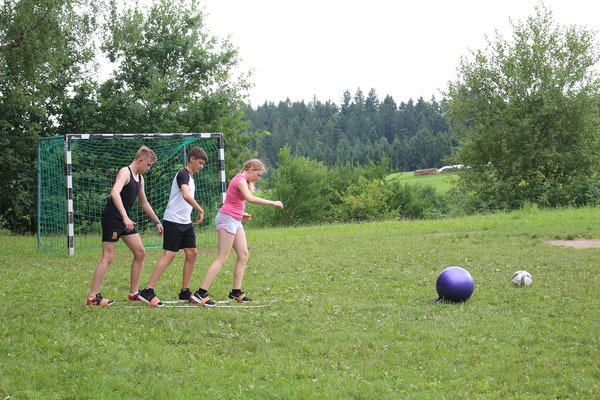 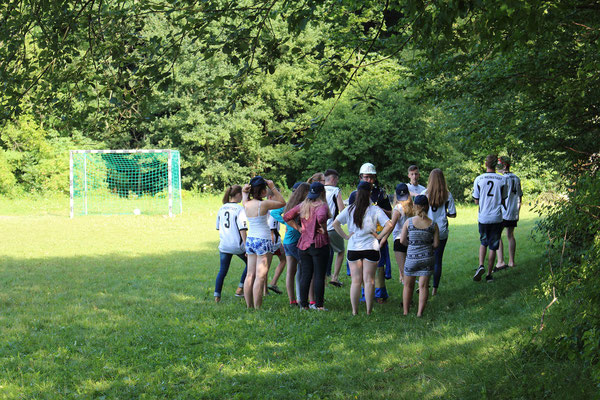 Tuesday, 8th August 2017
We woke up around 7.30 am. Then was breakfast at 8.15 am. We left the tent camp at 9.15 am and headed our way to the "Mercedes Benz Museum". We arrived at the museum around 10am. We headed back to tent camp at 12.30 pm and when we arrived back to the tent camp we practiced "Sing my Song" and had free time for about 20 minutes. Then we had dinner at 6pm and we had pasta for dinner which was lovely. At 7.30 pm we performed our "Sing My Song".
Luisa W., Kai, Sullivan


Wednesday, 9th August 2017
We woke up at 8 am and had breakfast at 8.30 am. Then at 10 am we had been given the instructions on team-geo-caching. Then we headed back to tent camp and then had lunch. After this the Japanese people came over and rewards were given and had lots of fun with them while playing games and activities. We then had a BBQ for dinner and enjoyed the sausages and chocolate bananas. We then said goodbye to the Japanese people and then had spare time until bed time.
Melissa, Krystal, Kaan

Thursday, 10th August 2017
We all woke up to have Welsh Breakfast at 11am which was delicious! After breakfast we all wrote kind letters to each other, most of us cried during writing the letters. While it was raining we played some indoor games. Some people were preparing for their speeches and also singing songs. Dinner was at 6.30 pm. We had curry which was lovely! After dinner the show started at 7.30 pm. Some parts were funny and some were sad. We had gifts to the leaders which were very thoughtful after that all the members had a surprise for the leaders. Which Martin said stop and put his hands up. The members made a candle hart. After that we had a party.
Matteo, Emilia, Jones, Charlotte

Friday, 11 th August 2017
We had breakfast at 10 am. Then we tidied the tent camp up. Lunch was at 3pm. We went to the Airport and said goodbye to the Welshies. Dinner was at 9pm and curfew at 1am.
Vanessa, Tom, Tyler


Saturday, 12 th August 2017
We woke up at 7.30am and had breakfast at 8am. After that we tidied the tents and area around the tents. Then everyone talked with each other and all of us prepared themselves to say good bye. But we all are a little bit happy that we can see most of the members next year.
Martin, Theo, Pascal